As part of the ‘Assistance for Syrian refugees and affected populations in North Lebanon’ program, funded by the United Nations High Commissioner for refugees (UNHCR), RMF and the municipality of Tikrit organised an event at the municipality to mark the conclusion of  the ‘Waste Collection’ project, implemented in Tikrit.

The event took place in the presence of RMF’s Executive Director, Michel Moawad; the head of the Directorate of Islamic Endowments in Akkar, Sheikh Malek Al Jadida; Archbishop Bassilios Mansour represented by Father Hanna Al Chaaer; the member of the Supreme Islamic Shari’a Council and head of the Future Movement’s supervision department, lawyer Mohamad Mrad; the head of UNHCR’s office in Akkar, Erdogan Kalkan; the head of the social affairs department in Akkar, Hassan Traboulsi; the mayor of Tikrit, Dr Hatem Al Ali; the presidents of the Union of municipalities in Akkar; as well as mayors, mokhtars and dignitaries from Akkar. 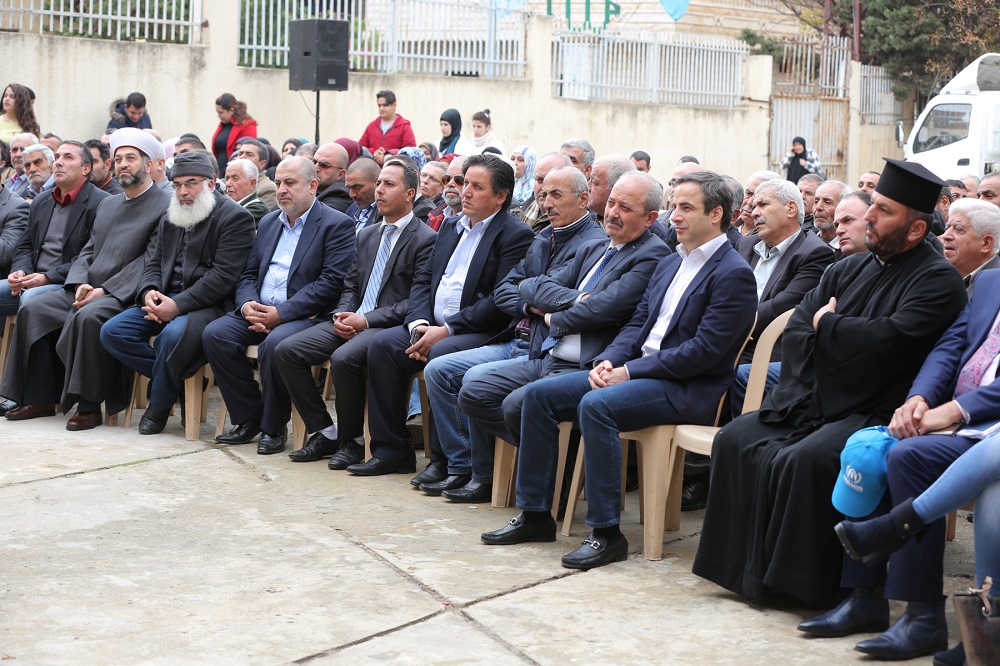 About the Tikrit project

More than 17,000 Lebanese citizens from Tikrit, and more than 2,500 Syrian refugees will be benefitting from the project.
Prior to the project, the town didn’t have a waste collection system and no means to transport the waste to the waste dump area outside the town. The only solution was to burn the waste, with all the negative consequences that that option generated.

The ‘Waste Collection’ project established a waste collection and transportation system, and provided 40 waste collection trucks. Three awareness sessions were also conducted, benefitting 120 Lebanese citizen and 25 Syrian refugees, and a study was done on the waste dump area by an environment expert, assessing the place, evaluating its negative impacts on the environment, and proposing the required steps to close it.

As a result, the dump area was transformed into an environmentally friendly site.

Speaking on the occasion, the head of the Directorate of Islamic Endowments in Akkar, Sheikh Malek Al Jadida welcomed those present and said: “There is no doubt that the good deed that has come your way, is a genuine deed that serves the country. This endeavour does not entail the well-known political benefits that are usually a primary motivation. In fact, Michel Moawad is not running for a Parliamentary seat in Akkar. He believes that the country is one, and that when a region is doing well, all of Lebanon is well.”

Addressing Moawad, he said: “You are young and promising. You come from a family that has given our country a lot. President Rene Moawad represents a National medal of honor decorating Lebanon’s chest. He is the nation’s true martyr. As for Mrs Nayla, she is a highly respected lady to whom we, today, express deep gratitude once again. ” Al Jadida wished for Michel Moawad success in the coming parliamentary elections, which would allow him to assume positions enabling him to serve Lebanon and its people more.

He also thanked UNHCR, RMF and the municipality for the implementation of the project, and expressed his hope that Akkar finds its way to Lebanon’s center stage.

Father Hanna Al Chaaer then read a speech on behalf of Archbishop Bassilios Mansour, in which he welcomed Michel Moawad “to ‘his home’ in Akkar.” Addressing Moawad, Archbishop Mansour added: “You are welcome here amidst those who love you. You come from a respected political family. You are the son of President Rene Moawad, who is Lebanon’s Independence martyr. He loved his country so much that he did not hesitate to offer his own life for its sake. We extend our thanks to all those who organised this event, and made this project materialize.”

The head of UNHCR’s office in Akkar, Erdogan Kalkan was the next speaker. He thanked the people of Lebanon and the Lebanese Government for hosting a very large number of Syrian refugees, stating that history will never forget this favour. He also assured that UNHCR will continue to support the municipalities and the implementing organisations, saying that “that support was just like a drop of water in the ocean”.

The municipality of Tikrit handed Kalkan a bouquet of flowers as a token of gratitude to UNHCR for funding the project. 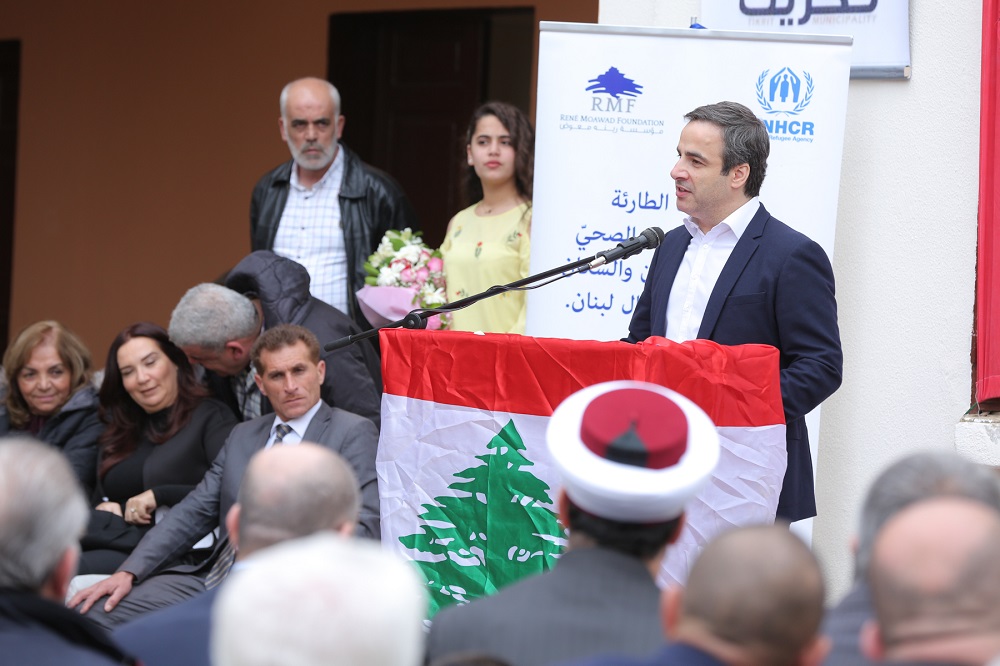 The last speaker was RMF’s Executive Director, Michel Moawad, who started his speech by expressing his thanks to the people of Akkar: “I thank you for your beautiful welcome. And I ask you not to thank us for the project that we implemented, as doing so was nothing but a duty. Whatever we do for Akkar is much less than what it deserves, as it has offered to Lebanon much more than we can offer back.”

He added: “Each time I visit Akkar, I remember RMF’s early beginnings in the 90ies. Back then, Akkar was a deprived region, despite what it had been giving to Lebanon and the Lebanese Army. It was a forgotten region, not taken into consideration in any political or development equations. I remember RMF’s first days, when we worked hand in hand with you for development, and were able, together, to reach real achievements. I remember too how grateful Akkar was then, making us feel that it was a part of RMF.”

Moawad noted that lately, “Akkar was not as forgotten as it used to be.” He made the promise that RMF will always remain committed to development and partnership with the people of Akkar, and stand by their side. “The project of Waste Collection in Tikrit”, he said, “is just the beginning. I hope that the town’s waste problems are now behind us and that there will be no more waste burning here. It is not acceptable that the Lebanese citizen’s most basic rights don’t get provided.”

Moawad continued: “This project confirms the need of cooperation between the international granting organisations – represented in this project by UNHCR -, local NGOs – in this case RMF -, and local authorities – municipalities – who play a vital role, as they know more than any other entity the development needs of their areas.

He concluded: “RMF, in partnership with international donors led by the UN and UNHCR, and in cooperation with municipalities, Unions of municipalities, local authorities and civil organisations, is moving forward in its mission to make development a ‘right’ not a ‘favour’, so that the Lebanese citizen remains in his land preserving his dignity and keeping his head high.” 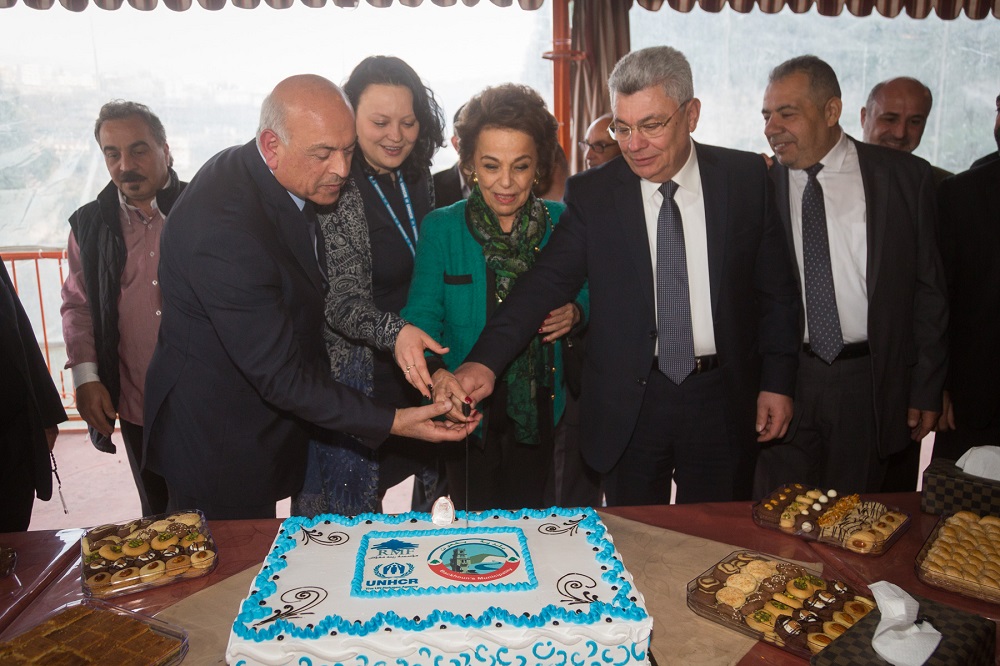 In cooperation with the Bakhoun municipality, RMF also concluded the ‘Establishing a network for the rain water drainage’ project, part of the ‘Emergency response to Syrian refugees and affected residents in North Lebanon for matters related to Water and Waste Water’ program, which is funded by UNHCR and implemented by RMF. The event took place at the ‘Al Widiaan’ restaurant in Bakhoun.

Present at the event, were RMF’s president, Mrs Nayla Moawad; UNHCR’s representative in North Lebanon, Galia Gobayva; the president of the Union of municipalities in Dunnieh, Mohamad Saadiya; the mayor of Bakhoun, Ziad Jammal; members of the municipality council; and the president of the Dunnieh mokhtars association, Mustapha Al Samad, along with Mokhtars from the region.

More than 70,000 Lebanese and more than 10,000 Syrian refugees will be indirectly benefitting from the project. A 481 meter canal for rain water drainage has been built, and 46 people (39 Lebanese and 7 Syrian) attended an awareness session on managing rain waters. The project is also benefitting the following neighbouring towns: Ain El Tineh, Taran, Hazmieh, Beit El Fiks, Kfarsabeen, Jirun, Safira, Nemreen, Korsayta and Bturmez.

Through this project, the crisis that the Bakhoun town was facing, when rain outpourings would sweep the roads and invade houses and orchards, was solved. The town was also suffering from severe accumulated damages caused by stagnating rain waters. The absence of water canals drainage had caused a real environmental tragedy.

He added: “The importance of this project is that it has helped ease the pressure generated by the flow of Syrian refugees coming to Bakhoun. It also enhanced the status of Dunnieh.”

He expressed hope that the project would be the first of many other similar partnerships to follow, praising the cooperation work between the municipality, RMF and international donors, to bring about sustainable development in the Dunnieh region and the whole of Lebanon.

The president of the Union of municipalities in Dunnieh, Mohamad Saadiya, also gave a brief speech, in which he said: “RMF has achieved a remarkable job in the development field, helping the municipalities cope with the many adversities they had to face, especially the challenges caused by the flow of Syrian refugees.”

UNHCR’s representative in North Lebanon, Galia Gobayva, explained the importance of the project for the local community, as it came as an answer to its imminent needs.

She added: “We are very happy to be able to provide support and help to the Lebanese communities, especially those that are hosting refugees. We thank RMF for the exceptional partnership between us, and hope to renew it for more similar projects in the future.”

The last speaker was RMF’s president, former minister Mrs Nayla Moawad. Mrs Moawad thanked all the people present and said that all that RMF is giving to Dunnieh, “is just like a drop of water compared to the gratitude that the people of Dunnieh showed upon the martyrdom of President Rene Moawad and towards what he would have been able to do for the country.”

She expressed her feeling of pride for the execution of the project, thanking the president of the Union of municipalities in Dunnieh, the mayor of Dunnieh and RMF’s team.